Rabbi Yehuda Krinsky speaks at Chabad of the Canejo on “The Lubavitcher Rebbe: Up Close and Personal” 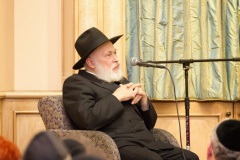 While much has been written and documented on the Chabad Lubavitch Organization and the Rebbe, details and specifics of day to day activities of the Rebbe are known only to a chosen few that have been in close proximity to the Rebbe on a regular basis.

There is a troika of individuals that have had that zchus to maintain a close relationship with the Lubavitcher Rebbe over almost 40 years.

A member of this elite group is Rabbi Yehuda Krinsky, the current public face of the Chabad-Lubavitch Hassidic movement and former secretary to the late Lubavitcher Rebbe Menachem Mendel Schneerson. Rabbi Yehuda Krinsky who is the Chairman of the Lubavitch educational and social services organizations deals with the thousands of sheluchim that have brought torah and yidishkeit to Jews throughout the world.

It was with a desire to get more of an “up front and close” view of the Rebbe that Rabbi Moshe Bryski, Director and spiritual leader of Chabad of the Conejo in Agoura Hills, CA., invited Rabbi Yehuda Krinsky to provide the many California supporters and members of the Chabad community with a more personal glimpse into some of the daily activities at 770, under the direction of the Rebbe zt”l.

Rabbi Krinsky began by describing his youth growing up in a large Lubavitcher family in a Boston suburb. He was one of the first students of the Maimonides School of Brookline, Massachusetts. The school was founded by Rabbi Joseph Soloveitchik and his wife Tonya. Maimonides didn’t have a certified English program and Rabbi Krinsky had to attend public school until 1946, when his parents sent him to Lubavitch in New York. His father decided to send him during chol hamoed, before the official start of school, so he would experience Shemini Atzeres and Simchas Torah with the Rebbe.

“The Freidiker Rebbe passed away in 1950 and the Rebbe would go regularly to visit the ohel of his father-in-law and daven there. It was two years later when I was asked if I had a driver’s license and when I answered in the affirmative, I was given the task of taking the Rebbe to the Ohel. From that time on, I was the designated driver for the Rebbe.”

“Were you able to strike up a conversation with the Rebbe during all those times that you were with him and drove him about,” asked Rabbi Bryski, “or where you just in a state of total awe and respect, so that you would not have casual conversations with him?”

“We certainly had conversations. There was much that I had to do and the rebbe would discuss things with me.

“During our trips he would sit next to me and talk to me about my learning and other things that concerned him.”

“It was the Rebbe who notified me that it was time to get married and he played a significant role in my shidduch with Devorah Kasinetz, the daughter of Rabbi Zev and Etta Kasinetz, whose Brownsville home in Brooklyn, New York, was a center for early Chabad-Lubavitch activities in the Unites States in the late 30s and 1940’s”.

“It was shortly before my wedding that the Rebbe asked me about my plans were for the future. I admitted that I had none and it was then that the Rebbe offered me the opportunity to join the secretariat. I was honored and of course accepted. I have been there ever since.”

“From the first moment that I started my job, there were long hours and long nights.”

Rabbi Krinsky went on to describe how early on in his working for the Rebbe he was called in and stood as he observed the Rebbe editing a letter that was typed for him.

“The Rebbe was adding words and phrases in the margins and drawing arrows as to where everything would go. He then handed me the paper and directed me to redo the letter with the corrections. The Rebbe said to me, “I know it looks confusing, but don’t get confused. Start from the beginning, go word by word, line by line and you will see that everything will work out fine.” “That was a lifelong message that he gave me, said Rabbi Krinsky. “and it is important advice that never left me. Never get confused, go through your work methodically and everything will come out fine.

Rabbi Bryski then asked about the Rebbetzin, who was not a public figure and seemed to stay pretty much in the background.

“She was brilliant and had all the wonderful qualities of an eishes chayil. She was devoted to the Rebbe and concerned about him 24/7.

They were very close. The Rebbe would have me relate various information to the Rebbetzin, so I got to know her.

She called me one night after I had a back injury and I was in pain and could not sit in a chair.

“I will call this orthopedic doctor I know, get you an appointment and drive you there. I told her, thank you, but if it is ok, I will drive there.

As to the doctor’s advice, I told the Rebbe, “Walk straight, he said,” To which the Rebbe commented, “That is what I have always advised people!”

But the most amazing story was the testimony during a deposition giving by the Rebbetzin in the famous seforim case. In 1985 it was discovered that priceless seforim were disappearing from the Chabad library.

The culprit turned out to be a relative of the Rebbe who claimed that he had ownership rights to these seforim. Insisting on questioning the ownership of the Library, this person insisted on taking the matter to the secular courts and not to a beis din to decide the matter. The Rebbe reluctantly had to take the matter to Federal court and the renowned Attorney Nathan Lewin filed on behalf of the Rebbe.

While many were concerned about her having to testify in deposition, she was a woman already in her eighties, the Rebbe said, “don’t worry, she would do fine. “ After a long and intensive deposition, the attorneys pressed the Rebbetzin with a final question. “Tell us Rebbetzin, did the books belong to your father or not?” Her immediate and most poignant response was, “Everything my father had belonged to the Chasidim. Nothing was his, except for his talis and tefillim.”

It was the Rebbetzin’s clear and decisive testimony that played a significant part in the Judge’s findings.

It is clear that the Lubavitcher Rebbe’s aspirations went beyond Crown Heights and covered the entire Jewish World. The brilliance, genius and dedication of the Rebbe to Klal Yisroel cannot be contested or questioned.

A major testament to his accomplishments is the vast network of sheluchim that have spread torah and yiddishkeit to the far corners of the world.

As Rabbi Krinsky summed it up, “You never got used to the Rebbe. To this day, to me, he was an enigma. As close as I was, you never got used to being in his presence. So much went on, so much had to be done. There was always respect, reverence and love.” 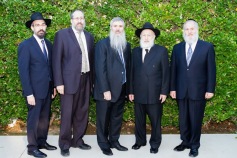 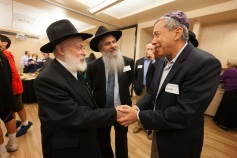 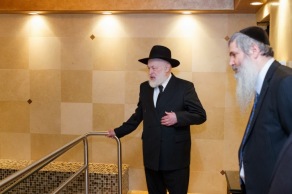