Hundreds of rabbis, synagogue and community leaders from across the country gathered on Capitol Hill on September 9th, in the midst of Congress’ debate over the Iran nuclear deal, to call on Congress to reject the deal that paves a pathway to a nuclear-armed Iran. The rally was organized by the Orthodox Union and the Rabbinical Council of America (RCA).

The rally was held a few days before Rosh Hashanah and opened with a poignant shofar blast, a deliberate connection to the Rabbi’s March held before Yom Kippur of 1943 in support of American and allied action to stop the destruction of European Jewry. That gathering of Rabbis at the White House was a painful event in American history. President Franklin D Roosevelt refused to meet the contingency! Instead, he disappeared through the back exit of the White House and left for vacation in a determined effort to reject American support for the persecuted Jews of Europe. 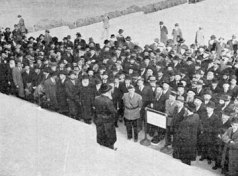 The Melitzer Rebbe, Yitzchok Horowitz, recites the El Maleh Rahamim in memory of victims of the Nazis

At the foot of the Capitol building 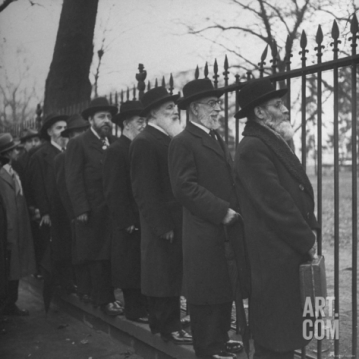 Outside the White House. President Roosevelt refused to meet with them

The gathering of orthodox, lower income, Eastern European rabbi’s at the Rabbi’s March were true representatives of the Jews who were being annihilated. These men knew there was no better institution to save the victims of the holocaust than The White House, but their request was publicly turned down, and reported in the press at the time. The outcome of the war would have been very different if the Rabbi’s March of 1943 had met with some success.

With this in mind, the rabbis at the September rally came to represent tens of thousands of members of the American Jewish community, from more than 20 states and every region of the country. They recognized the importance of having their voice heard.

Martin Nachimson explained, “The reason we are gathered here, in the shadow of the Capitol, is to make a clear statement that this deal is morally repugnant. Under this deal, the Iranian regime will be given greater legitimacy, power and money, despite its being deeply anti-American, anti-Semitic, and the leading sponsor of terrorism in the world.”

Rabbi Lookstein noted that the deal will give legitimacy and financial power to Iran’s leaders. These are the men who support global terror and openly threaten the State of Israel, as well as the United States and he added, “This is why, days before the Day of Judgment, I am here with my fellow rabbis to raise our moral objection to the nuclear deal with Iran.”

Rabbi Penner remarked that, as Jews, we recognize that evil exists in the world. “Iran is evil and they will do evil if good men do nothing,” he declared. With the imminent start of Rosh Hashanah, “We ask to be given clarity and strength. Clarity to see evil for what it is and strength to fight those who would do us harm.”

Allen Fagin gave the closing speech and compared the vote and the Iran deal to an “Alice in Wonderland” moment. Fagin called on the Jewish community to stand together in support of of Israel’s security and defense and with support for the expansion of non-nuclear related sanctions against Iran. “And we need to be vigilant and vocal to make certain that the tens of billions of dollars to which Iran will gain unfettered access through sanction relief, is not used to arm her terrorist proxies,” he exclaimed.

After the rally, hundreds of rabbis participated in lobbying meetings with U.S. Senators and Representatives where their message was heard.