On Sunday, May 1st, the Los Angeles Museum of the Holocaust (LAMOTH) hosted its annual Yom HaShoah commemoration in Pan Pacific Park. Survivors and community members attended the event, held in a tent adjacent to the museum. Mayor Eric Garcetti addressed the crowd, among others.

“[T]oday is part of tradition in Los Angeles to show our heart and our connection [to the Holocaust],” Mayor Garcetti said later in an interview exclusive to The Jewish Home – L.A. “Most importantly, to honor those who still live amongst us – those are our grandparents, our brothers and sisters, our aunts, uncles, and great-grandparents. Each year that we are here with survivors, it reminds us that we must take on what they do, and that is to remind people that this is real, we have survived, and we are strong. This is a reflection of L.A.’s heart…

“L.A. is a great Jewish city,” the mayor added. “People came here when they were really in need. I love how we tie that to what’s going on in the world. Of course, I will always be here. I was the first Jewish mayor elected, which has such a resonance for me. I wouldn’t be here if my fathers hadn’t survived. But we are all here, and part of this wonderful city.”

Following the anthems for the U.S. and Israel, Samara Hutman, Executive Director of LAMOTH, took the stage. Ms. Hutman has been the executive director for the past three years, and clearly she has a strong emotional attachment to the survivors as evidenced by her outpouring of love to each individual and family member. This is equally true of Beth Kean, President of LAMOTH, who recognized three generations of her family present at the event. Her grandparents Rose and Arnold Rakoszynski were survivors. She noted that thousands of students with diverse backgrounds come through their doors and that “LAMOTH is stronger than ever and will never stray from their mission.”

The success of LAMOTH is largely due to the generosity of Jona Goldrich and attorney E. Randall Schoenberg. Mr. Schoenberg was board president for ten years and recently stepped down. He was responsible for solidifying the lease for the building with the city. He also famously fought the government of Austria, successfully recovering a famous painting by Gustav Klimt for Marie Altmann. Schoenberg’s heroic actions were portrayed by Ryan Reynolds in the film “Woman in Gold.” He donated his entire proceeds from the film to the museum.

Mr. Goldrich’s daughter, Melinda, has followed in her father’s footsteps. “My father always thought that it was very important to have Holocaust remembrance opportunities everywhere in the United States, especially in Los Angeles where there were at one time many survivors, many who aren’t alive anymore, and survivor families…I am very proud of him, and I now take note of the family foundation which focuses on Holocaust education and other type of Jewish education, and support of the Jewish community in Los Angeles and worldwide really.”

Consul General of Israel David Siegal spoke, as well. Mr. Siegal will soon be leaving L.A. after five years of dedicated service to the community. He began by commenting that it is interesting that Yom HaShoah follows Pesach. The fact that they are so close together reminds us of our ongoing struggles.

Mr. Siegal stated, “Every person who was murdered was an entire universe lost forever. We honor their memories and their legacies.” Paying homage to the great contributions of survivors, Mr. Siegal said that there are only 150,000 survivors left in Israel out of more than half a million that came to the Jewish State in its inception. He added, “Never in history has there been a group of immigrants who came from the depths of depravity and made such tremendous contributions in science, museums, art, history and technology. Even in the ghettos and concentration camps, Jews held onto their tradition at great peril.”

Mr. Siegal related the story of survivor Motke Blum. Mr. Blum was born in Romania. He escaped from a Nazi forced labor camp as a teenager after four years of imprisonment.  When he feared death, he said Shema Yisrael and prayed for an angel or a white dove. He credits his painting with helping to save his life. He says that the angel still visits him in his paintings or sends the dove. Mr. Blum took refuge in pre-state Israel in 1944 and is now a highly-regarded painter and artist living in Yerushalayim. He is turning 91 this week of Yom HaShoah. His art – which includes an eclectic mix of images, including a clown, a shtetl, and a ship – is shown around the world and currently is on display at LAMOTH.

Two other survivors present spoke about what the event meant to them. Mr. Tomas Kovar stated, “I enjoy working with the kids because if we won’t be around, they have to carry our memories.”

Mrs. Eva Brettler said that she was grateful to be part of the event, adding, “I want to thank Hashem for the energy, and Hashem gives you the honor dor v’dor to participate.” Mrs. Brettler has spoken about her experiences at Ohr Eliyahu and the Steven Wise School.

Also among the survivors present at the event was Mrs. Frieda Berger, who is well known for her philanthropy and chesed in the community. The program concluded with Adam Yaron singing a beautiful rendition of “Mishlehu,” music by Matti Caspi and lyrics by Ehud Manor. 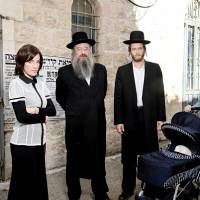