BIKUR CHOLIM CALLS FOR CHANGES TO

In response to the current measles outbreak in the Los Angeles Jewish Community, Rabbi Hershy Z. Ten, president of Bikur Cholim convened an urgent teleconference on Monday 1/9/17 with an acclaimed panel of nationally recognized leaders in pediatrics, public health, and constitutional law to address this crisis.  The necessity of vaccinations is well-documented and supported by experts in pediatrics and infectious diseases, including the American Academy of Pediatrics, American Medical Association, all US departments of public health, and the Autism Science Foundation, to name a few.  In 2000, the US declared that measles had been eliminated; however today it has found its way into our population, even in the most upwardly mobile and educated families due to the dangerous wave of erroneous anti-vaxxing information prompting parents to refuse vaccinations for their children.  This has resulted in an alarming jump in measles infections, with more cases over the last 2 years than the entire decade prior.  When an outbreak was identified in Southern California 2 years ago, Bikur Cholim began its efforts to raise awareness of the serious threat posed by non-immunized children in our Jewish day schools which included its support for the California legislation that subsequently passed making it mandatory for children enrolling in school to be vaccinated, regardless of personal beliefs.

When advised of this recent outbreak identifying numerous cases originating in the LA Jewish community, Bikur Cholim immediately set out to coordinate this forum.  The live teleconference included more than 70 Jewish day school faculty and synagogue rabbis throughout Greater Los Angeles who called in to learn about the threat measles carries, how it spreads, and the legality for individual institutions to create polices that go beyond current vaccination law.

Rabbi Ten introduced the panel and shared an overview of the topics to be addressed and then opened up the discussion with Franklin Pratt, MD (Medical Director for the Los Angeles Department of Public Health Immunization Program).  Dr. Pratt categorically declared that Los Angeles is experiencing an “outbreak”, adding that his Department expected the number of 15 confirmed cases to significantly rise before this is over [as of 1/23/17 the number of confirmed measles cases rose to 18].  He went on to state that the measles first presented in the LA Jewish community and associated day schools; and most alarmingly, he shared that one of the infected children’s parents never disclosed to the school that their child was infected, stating, “…there’s an exceptionally high likelihood that this child infected others.”

Dr. Pratt spoke of his experience with people dismissing the severity of measles due to their lack of experience with the illness and awareness about the illness.  He pointed out that in addition to being extremely contagious, the measles virus behaves as if it is actively searching out the susceptible individuals to infect.  To put this into context, just 1 infected child can infect up to 18 people, and if a person with no immunity encounters the virus, they have a 90% chance of infection.  He went on to explain that we need 97% – 99% of the population to be vaccinated or have natural immunity; this is referred to as “herd immunity”, which helps to protect the 3% of those who cannot be immunized due to medical reasons.  Dr. Pratt stated that pregnant women with no immunity to measles who acquire the disease have a higher rate of still-births, and babies born to infected mother, although very rare, suffer from higher rates of devastating congenital anomalies.

Robert Adler, MD (Chief Medical Officer, CHLA Health System at Children’s Hospital Los Angeles), who served as both a panelist and forum moderator, emphasized that measles is the most contagious virus known and shared his personal involvement in outbreaks over the years with a number of children falling seriously ill, and even dying from measles complications.  Dr. Adler explained how non-immunized and infected children can present devastating consequences to fellow students suffering from immunosuppression due to various diagnoses such as cancer, as well as addressed how aggressively measles attacks the most vulnerable population; causing severe respiratory, eye, and mental diseases.  Children with measles can be contagious for days before showing any symptoms; meaning even 5 days prior to developing a rash, the child is already contagious.  He pointed out that measles is an airborne virus that lingers in an environment hours after the infected person has left the area which is of particular concern to physician waiting rooms, as well as any public setting.

In addition to schoolchildren, Dr. Adler expressed concern with regard to synagogue playgroups where pregnant women and children under 12 months share common space with no clue as to the possible danger of contracting measles.  Most importantly, he stressed that synagogues need to educate their parent population on the threats non-immunized children pose and consider implementing policy within their own community to encourage responsible parenting and minimize the risk of communicable diseases.

Panelist Dr. Richard Pan (California State Senator, District 6) served as an expert on the current State vaccination law (SB 277) which was based on the bill he co-authored that went into effect on 7/1/16.  Dr. Pan summarized the law as requiring all children in California to be immunized prior to enrollment in kindergarten (unless they have a legitimate medical exemption from a physician).  After the first vaccination verification in kindergarten, a subsequent verification is also performed at 7th grade.  This law also applies to children who move here from out of state mid-term/year and allows for a public health officer to remove children from school if there is an active case on campus.  Those parents who refuse to vaccinate their children have the option of home-schooling or independent study through a public school district.  However, the law does not require faculty or staff to be vaccinated.

Dr. Pan went on to voice his staunch support for private schools to enact their own policies above and beyond State law; citing that people are in “danger” and that it’s up to schools to be diligent in protecting its children.

Bringing his expertise in jurisprudence and the application of the current vaccination law to the table was world renowned legal scholar and panelist, Erwin Chemerinsky (Dean and Distinguished Professor of Law at UC Irvine School of Law).  Dean Chemerinsky was asked to address the many inquiries Bikur Cholim received from Jewish day schools regarding their legal ability to restrict non-immunized children from attending school, especially if it’s mid-semester/year, to which he shared, “There’s absolutely nothing in the law that prevents a school from setting a strict policy with regard to requiring vaccinations and excluding those who have not been vaccinated.  I don’t think it’s any problem to do that in the middle of the year, either; especially in light of a measles outbreak,” adding, “Every challenge to a vaccination law in the country has lost; courts have always found that the justification of protecting children in stopping the spread of communicable diseases justifies requiring that children and teachers be vaccinated.”

Dean Chemerinsky stressed that private schools can be stricter than State regulations, provided they are not violating the law; however could not unequivocally state whether or not a school could be sued due to a child or teacher contracting measles, citing uncharted territory.  He shared that he believes litigation could be a possibility based on the argument that the school did not take adequate precautions to protect its faculty and students.  The Dean expressed his belief that, “…school administrations have an ethical duty to let parents and faculty know of the presence of a communicable disease.”

Subsequent to the teleconference, Rabbi Ten issued his statement as follows:

“Los Angeles is blessed to have one of the largest Jewish populations in the country; with synagogues and schools that reflect our community’s steadfast commitment to Torah values.  Unquestionably, protecting lives is paramount to these tenets.  With this is mind, our synagogue and school leadership must give this life-threatening crisis the serious attention it deserves in terms of tangible action.  We need to see our community leadership exhibit the same level of passion and dedication to the health and well-being of our children, families, and neighbors as we see being focused on political action committees, missions to Israel, and scholar in residence events, which are so heavily promoted.  We need to see school administrations continue to make the safety of their staff and students a top priority; placing as much importance on this threat as they might toward issues such as social media, inclusiveness, or bar/bat mitzvah policies.  That being said, we are urging our schools and synagogues to immediately implement new policies for 2017 that will prevent any children who aren’t immunized due to personal beliefs from attending a school or playgroup.  On this issue we must remain resolute in our unwavering dedication to protect the most vulnerable among us from falling prey to an avoidable tragedy.” 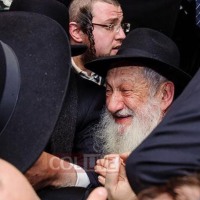