The Shloshim of L.A.’s Beloved Schwartzie

The night after Purim, hundreds of people gathered at the Writers Guild in Beverly Hills, where the Chai Center holds their annual Yom Kippur service, to celebrate the life of Rabbi Shlomo Schwartz, affectionately known to Jews around the globe as Schwartzie.

The greatness of Schwartzie was described by the eloquent speeches and stories shared by his children, friends, and his wife, Olivia.  Each story illustrated how this one Jewish man, a shaliach for the Lubavitcher Rebbe, was able to make a difference and touch countless lives. As several of his children explained, there was nothing Schwartzie wouldn’t do to reach out to Jews, including wearing rainbow suspenders, handing out flyers with his son Mayshe (with the police in tow), and driving a car with his collection of colorful bumper stickers. No one would fear approaching a rabbi wearing these suspenders, and the bumper stickers attracted curious people.

Many of these fellow Jews were later welcomed at the Schwartz home. Schwartzie and Olivia hosted 60-plus guests every Shabbos in a warm, loving environment. There, they were charmed by Schwartzie’s charisma and the unforgettable, healthy home cooking of Olivia. A family friend – from the only Jewish family from her town in New Mexico – said her life was transformed in the twelve years she knew the Schwartz family, beginning with one such uplifting Shabbos experience. Other amazing stories will hopefully be shared in a book in the near future.

Mendel Schwartz told the audience that his father loved each and every one of them. He asked that those who were privileged to know his father commit to at least one deed listed on a card they handed out – and help fellow Jews to do likewise: participate in weekly or monthly Torah study, practice love of fellow Jew, give daily tzedakah, put up a mezuzah, begin to keep the laws of kashrus, wear tefillin, light Shabbos candles, get a Jewish education, read a minimum of three Jewish books (Bible, Prayer Book, and Psalms), and/or follow the laws pertaining to Jewish marriage. 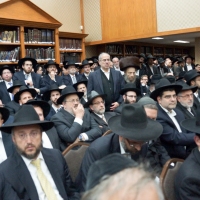