If the TSA had stopped Rabbi Ami Cohen on his way to Los Angeles last week, they would have been shocked by the contents of his suitcase. Rabbi Cohen specializes in bringing the halachos of kashrus to life with his exciting array of taxidermies, animal skulls, hooves, horns, and skins. Many of L.A.’s schools were lucky to see his legendary presentations, among them Yeshiva Gedola, MBY, the Cheder, Bais Tzivia, Toras Emes, Ohr Eliyahu, Maimonides, and YULA. 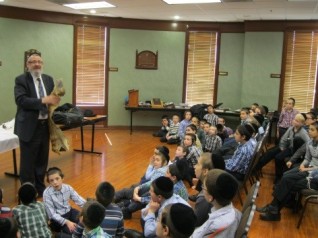 Rabbi Cohen explained the difference between a chaya (wild animal) and beheima (domesticated animal). “Think of it this way,” said Rabbi Cohen, “A chaya is a New Yorker and a beheima is a Californian.”

After clarifying that the signs are the same in both chayos and beheimos, Rabbi Cohen proceeded to demonstrate, using visual aids, what the simanim are. The first sign of a kosher animal is fully split hooves. Rabbi Cohen showed the students cow feet, goat feet, deer feet, and elk feet, pointing out the complete split found in the hooves. He also exhibited feet of non-kosher animals, such as horse hooves. Suspense built up as the students beheld a stuffed skunk, mink, and finally a bearskin.

Rabbi Cohen then moved on to the second sign of a kosher animal, ma’ale geirah, or chewing its cud. The students learned that it is possible to determine if an animal chews its cud simply by examining its mouth. If an animal is missing its incisors (front teeth), it is a sure indication that the animal is kosher. The students viewed the skulls of a cow, camel, alpaca, llama, and zebra, checking for incisors in each one.

Rabbi Cohen then pulled out various horns, explaining that all kosher animals have two horns, except for one animal that possesses one. “Does anyone know which kosher animal has only one horn?” he asked.

“A unicorn!” answered one student.

Students also learned the signs of a kosher fish and kosher bird, and discussed the concept of mesorah. The students thoroughly enjoyed Rabbi Cohen’s dynamic personality, funny stories, and unique props, and attained a greater understanding of simanei kashrus.