Excitement is in the air as the Los Angeles Jewish community is gearing up for the Great Lag B’Omer Parade, scheduled to take place on Sunday, May 14th. According to the flyer, the parade will be “bigger and better than ever!”

The Lag B’Omer Parade, a celebration of Jewish unity, takes place in many major cities throughout the world whenever Lag B’Omer falls on Sunday. Last time the parade was held was four years ago, and the next parade is expected to take place seven years from now. Chabad of California has been organizing Lag B’Omer parades since 1970, when the first parade took place on then-popular Fairfax Avenue.

“Lag B’Omer is a day of light and happiness,” says Rabbi Boruch Shlomo Cunin, head shaliach of Chabad of California. “With the spirit you can gather at the parade you’ll be uplifted the rest of the year.” 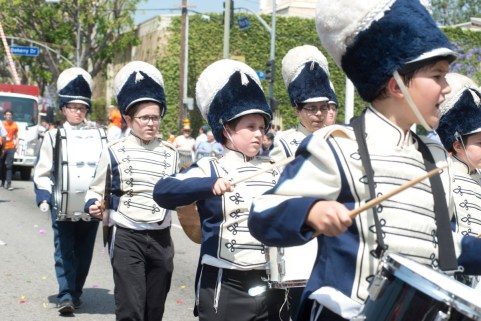 The Los Angeles parade director is Rabbi Mendel Duchman, who heads the Kol Yaakov Yehuda Congregation, a junior congregation under the auspices of Congregation Levi Yitzchak in Hancock Park. Rabbi Duchman explains that the Great Parade was initiated by the late Lubavitcher Rebbe as a result of the Holocaust. “They tried to extinguish Jewish identity,” says Rabbi Duchman. “[In response], we make it public.” An estimated 5000 people are expected to attend the Lag B’Omer Parade in Los Angeles.

15 local Jewish schools and three public schools will participate in the parade. Pico Boulevard will be closed to traffic between Robertson and Doheny, as 15 floats and five marching bands will parade down Pico between 10 a.m. and 12 p.m., accompanied by police escort. The floats are made by local schools. Rabbi Meyer Green, director of youth activities at Chabad of the Valley, will be describing the floats from the grandstand.

After the parade, Pico Boulevard will be transformed into a full-blown amusement park, titled The Great Fair, which will last from 12 to 4 p.m. The fair will offer something for all ages: rides, carnival games, live music, food, and more. The police, fire department, and the U.S. Army will participate in the carnival, providing educational programs for the attendees.

Jewish music stars, Uncle Moishy and Eli Marcus, will hold a concert. Uncle Moishy, known to generations of Jewish children, was invited to several other locations for this Lag B’Omer, but he chose to come to Los Angeles, explains Rabbi Tzemach Cunin, one of the parade organizers. Eli Marcus grew up in Southern California. An accomplished musician, he lives in New York and travels the world performing. The Los Angeles parade organizers are excited to welcome Eli Marcus back home for Lag B’Omer.

As this year’s Lag B’Omer coincides with Mother’s Day, a special part of the program will be dedicated to Jewish mothers. “We will be saluting the Jewish mother,” says Rabbi Duchman. “Every Jewish mother wants her child to be a proud Jew.”