An Israeli Journey: A Profile of David Azari

When we were welcomed into David Azari’s home on a cool L.A. night, Prigat and a bowl of nuts were waiting for us on the kitchen table. Azari has called Los Angeles his home for 40 years, but his story doesn’t begin here. It starts, generations back, in Israel.

David himself was actually born in Egypt, a blip on his family’s otherwise unbroken Israeli line. When asked how many generations his family had been in Israel before his grandmother moved to Egypt, he says, “Since we left Egypt with Moshe Rabbeinu.” They were as Israeli as it gets: “My grandma, before she went to Egypt, when she was young, she was going to school with Ben-Gurion.” His family had never known anything but Israel; tragedy took them away.

His great-grandfather made deliveries by camel. One day, in the early part of the 20th century, the camel lashed out and killed him. His great-grandmother remarried an Egyptian man and took his grandmother with her to Egypt. David’s father and David himself were both born there. And, for a while, life was fine.

“It was okay. Jews, Arabs – everybody was living peacefully,” he explains. “And then the Muslim Brotherhood started to kill the Jews there.” That’s when his father decided it was time to go – and there was only one place he wanted to go. He went to a government officer to try to get a secret visa, but was warned against it. Instead, the officer told him to get visas for France. “‘Say you are going just for a vacation in Europe.’ So [my father] went with his mother and his brother and me and my two brothers. I was three years old. And we went from there to France and from France to Israel. In 1949 we arrived [in] Israel.” The family started out – or started again – in Be’er Ya’akov, in a tent camp.

Because they had to sneak out of Egypt, they left as though they were just taking a vacation. “In 1947, my grandfather had four stores, like in Rodeo Drive. Clothing and cosmetics, perfume….” They left it all behind, along with their home and most of their belongings. His grandfather did bring one bottle of perfume essence, but that broke on the journey. “For years we’ve been smelling that from the clothes,” he adds with a laugh.

But though they left most of their life behind, they didn’t exactly come empty-handed. “[My father] went to a carpenter, to make him a chair. Inside the legs, big legs, he put coins of gold.” His grandmother came with them, so they pretended she was disabled and the chair was necessary for her. “They went to the boat to go to France, and the captain told them, ‘No, you don’t need this, throw it away, we don’t have room.’” They convinced the captain, and when they arrived in Israel those coins enabled David’s father to open a grocery store.

That didn’t mean life was easy. “He was fighting just to bring parnassah. We suffered there a lot. It was no food, no nothing. It was very hard to live.” Eventually the family made it to Lod, where they still have a house today.

David’s wife, Rachel, also has deep roots in Eretz Yisrael. She is the fourth generation of her family to be born in Jerusalem. In fact, when her mother was a child, she used to make money by playing guide to tourists visiting the Old City. Rachel herself was just a baby when Jerusalem was under siege in 1948. Hard to live describes her family’s situation at that time too; her mother traded ration eggs for bread in order to have enough to feed all the children. When the siege ended, her family moved to Tel-Aviv.

During the Six Day War, David’s military service also took him to the Old City… and to a unique experience. 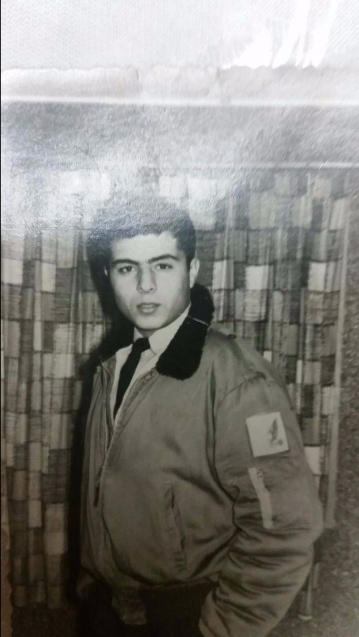 Like most Israelis, David served in the IDF. He started out in the Air Force, but he was then moved to a small, special anti-tank unit. If you’re picturing an imposing tank, think again. They faced down tanks with missiles, sure – missiles fired from the backs of Jeeps! “You have to see the tank, to knock it down,” David explains. “And, if not, then you have to run away. Run for your lives!”

A speedy escape was essential because to knock out a tank they had to get within two miles of it, while the enemy tanks had a range of three or four miles. It was not a job for the faint of heart. And this unit would often be on the front lines: They would go ahead to clear away opposing tanks before the other soldiers moved in.

When the Six Day War began, David had no idea where he would be sent. Though they could have gone to Egypt, Jordan, or the Golan Heights, his unit was sent to Yerushalayim, to support the tzanchanim (paratroopers). They were there to clear their path of tanks ahead of the tzanchanim, but as it turned out there were no tanks. So they waited.

He remembers that time vividly. “From Givat Hatachmoshet we went to Augusta Victoria. We stayed there around three hours, and then they told us to go down. We were sitting on the street. Lines and lines of soldiers, waiting for orders to go in. All the neighbors came with coffee, cake, food…everything they were giving us, like one big family.”

Eventually, around noon, they were given orders to go in. The main fighting was over, but there were still snipers shooting from within homes. “They told us, ‘You have to find snipers.’” So he and the other soldiers in his unit went looking.

“We went, about four people, to a house. I knocked on the door. And I saw an old woman. She was blind, she didn’t see nothing. I told her in Arabic, ‘Do you have anybody hiding here?’ She said, ‘You are Egyptian!’ I said, ‘Yeah, I am Egyptian.’ She said, ‘I am not Muslim, I am Christian.’ I said, ‘I don’t care who you are, but do you have any children at home?’ She said, ‘No, I have nobody there.’

“We went inside, and we were looking around. One of the soldiers tells me, ‘They have a door there, I don’t know what this door is.’ I told him, ‘No, you stay out, and I will go inside and see who is there.’”

The door wouldn’t open, so he kicked it in. In front of him was a narrow staircase, leading to…garbage. “A lot of garbage it was there. It was like a small alley [between the houses], but it was full of garbage. I told him, ‘Let me go under the bridge and we’ll see if anybody is hiding there.’ So they were protecting me from behind. I went down.

“As soon as my feet touched the floor, my whole body was shaking. I was in a makom kadosh, but I didn’t know; I didn’t know where I was standing. This whole area was full of houses. I was hearing soldiers from the other side. Then all of a sudden I was hearing, ‘Chevrei, we are in the Kotel! The Kotel! The Beit Hamikdash!’ 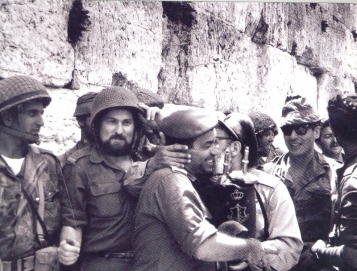 Soldiers celebrating the liberation of the Kosel

Clearing what’s now the plaza at the Western Wall

“I said, ‘What Kotel? Where is the Kotel? I don’t see the Kotel.’ Then I saw those big stones. You know, by the ezrat nashim, there it used to be stairs. I went down through those stairs. I’m the first one was there,” he adds proudly.

“So then I went up to the soldiers, and I said, ‘Baruch Hashem, we are in Yerushalayim, and this is our Kotel.’ We said ‘Shema Yisrael,’ and all the soldiers were very happy. We told our captain that we already were in the Kotel. We didn’t find any snipers.”

They were then sent to Shechem, to liberate the city. From Shechem they were sent to the Golan Heights, but the war was over before they were needed there.

The next time he visited the Kotel, it was with his new wife. “I promised her that if I come back alive we’re going to get married,” he says with a smile. They’ve been back many times since then. “The last time we were joking with the guide, [I said] ‘Somebody stole the stairs from here!’ And he said, ‘You were the first one, huh?’” Those stairs were one of the first things to be cleared out of the Old City.

His memories of the Yom Kippur War do not bring back the same smiles. His unit was sent to Ramat Hagolan, where they took heavy fire from Katyusha rockets. “It was maybe thousands of Katyusha. We fell down, and we have to cover our head. All the stone was exploding on the mountain, and coming on our backs and burning our backs from the heat. It was so hot there.” Air support came to the rescue, but while he remembers the battle in the air (“It was exactly like in the movies.”), that’s all he remembers. “I opened my eyes in the hospital. I was in shock.”

That’s what brought him to California. “It was very, very tough. After I finished this war, I went back to work, but I couldn’t stay there. In 1976 I came to the U.S. just to relax a little bit. I came here with a lot of pills, valium, and stuff for relaxing. And I throw everything to the garbage because I didn’t hear news, and I didn’t know English, and baruch Hashem, nothing bothered me! And that’s it.”

40 years later, they’ve made a beautiful life in L.A. Their three children grew up here, and their grandkids are currently attending Yavneh, YULA, UCLA.

While David could never bring himself to go back to the Golan Heights, they visit Israel regularly, and they always stop in Yerushalayim. Though the Israel of today is very different from the one they left. “I was a driver in the army; I couldn’t even drive in Israel today. Everything is new roads, new everything.” They feel that the attitudes are changing faster these days, too.

His wife looks thoughtful, wistful. “My heart every day is there,” she adds.

“Of course,” he says without hesitation. “Every time we go, we go to Yerushalayim.” 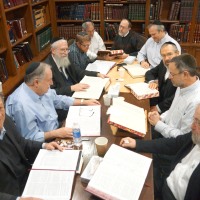 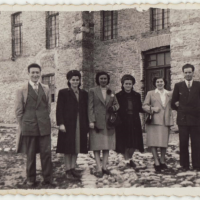