On Tuesday, May 16th, the West Coast Friends of Laniado Sanz Medical Center of Netanya, Israel held its first annual Trustees Reception at the home of Ilan and Linda Gorodezki in Hancock Park. The goal of the reception was to raise funds for the creation of a new Gynecologic Oncology Department at Laniado Hospital. In addition to the hosts, the reception steering committee included Sol and Gabriella Goldner, Victor and Mazal Hadad, Michael and Sheryl Rosenberg, and Urie M. Lieberman, Director of West Coast Friends of Laniado. The event was co-chaired by Sol Goldner, Sol Teichman, and Joe Kornwasser.

Linda Gorodezki, the hostess and MC of the event, spoke about her family’s visit to the Laniado Hospital several years ago. They were impressed with the deep appreciation the patients expressed towards their doctors and hospital staff. The hospital, Linda said, opened in 1975 and currently operates 35 departments, serving close to half a million people of all backgrounds – religious and secular, Jewish and Muslim.

Then Cantor Netanel Baram of Beverly Hills Synagogue, who grew up in the Old City of Jerusalem, treated the guests to a heartfelt rendition of “Yerushalayim Shel Zahav,” accompanied by musicians.

The first speaker, Rabbi Shlomo Einhorn, Dean of Yavneh Academy and the rabbi of Kehillat Yavneh, spoke about the Klausenberger Rebbe, Rabbi Yekusiel Yehuda Halberstam, ztz”l, the founder of Laniado Hospital. “In order to understand the identity of this magnificent institution we need to understand where it came from,” said Rabbi Einhorn. He explained that the Klausenberger Rebbe, descendant of renowned Chassidic dynasties, was a learned rabbi whose wife and eleven children were murdered by the Nazis, y”sh. Rabbi Halberstam said to G-d, “I lost everything, but not You, G-d. I’m still holding on.” He started over in Netanya, devoting his life to “taking care of those who cannot take care of themselves,” Rabbi Einhorn said, adding that the same spirit still permeates the way the hospital operates.

The next speaker, Dr. Limor Gortzak Uzan, Head of Gynecologic Oncology Department at Laniado Hospital, shared her experience with two of her patients, two sisters whose stories ended tragically. The older sister refused genetic testing and did not reveal her condition to her extended family. She later blamed herself for the death of her younger sister, which might have been prevented had the younger sister known about her genetic predisposition. Dr. Gortzak Uzan explained that the patients are part of their families and culture, which needs to be taken into account when treating them. She praised the dedication of the staff at Laniado expressed her appreciation to the donors. “It is truly warming our hearts that people demonstrate their care,” said Dr. Gortzak Uzan.

The guests then watched a video presentation about the Laniado Hospital, which featured stories of three patients. The common theme expressed by the patients and their families was the care the doctors and staff of the hospital extend towards not only the physical, but also the emotional wellbeing of their patients. A child brought to the emergency room of the hospital gets assigned a surrogate mother “to take care of the soul of the child” – to be with the child in their frightening situation and to provide emotional support. Each patient is “always greeted with smiles and hugs, and feels like part of a family.”

The next two speakers were Imri and Hadas Hadad, the grandchildren of Azizi Hadad, a”h, a long-time supporter of the Laniado Hospital who’d passed away last year. Imri spoke about his grandfather’s close relationship with the hospital staff. He described the environment at Laniado. Most hospitals are filled with sadness and grief, he said, but not Laniado. “The second you walk in, you realize it’s different,” he said. “There is hope. The goal is not to cure the disease, but to cure the patient, not only in a medical way, but in a personal way.”

Hadas added that her grandfather, an optimist by nature, cared deeply about Laniado because “it’s about giving hope, helping people focus on the positive and look for a brighter future.”

The guest speaker, Zvi Yechezkeli, Head of Arab desk at Channel 10 News in Israel, spoke about the situation in the Middle East, emphasizing that it is impossible to understand the Middle Eastern mentality through a Western lens. He explained that there are three conflict areas in the Middle East: between the Sunni and Shia Muslims, within Sunni, and between the Muslims and the Western world. The internal conflicts are the causes of most violence in the Middle East, with the majority of the victims being Muslim. While 95% of Muslims are not interested in war, the vociferous 5% claim to speak in the name of Islam, which means that Muslims won’t speak against them. “The Muslim world bleeds and is asking the Western society for help,” said Mr. Yechezkeli. “The most important thing for us is that when we neglect that part of the world it will come here.” 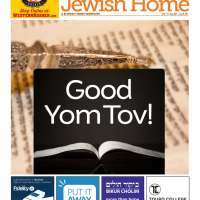 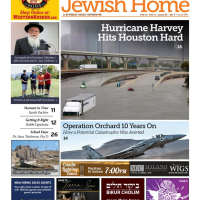