“These stories are really his….” writes D.B. Estrin in her introduction to It Happened at Heritage House. She refers to the legendary Rabbi Meir Schuster, zt”l, who founded Heritage House in 1985. Although Rabbi Schuster’s goal was for young travelers to taste Torah at yeshiva or seminary, most were not ready to go directly to such an institution from knowing next-to-nothing about yiddishkeit. Thus, Rabbi Schuster needed someplace “in between,” a free youth hostel where young Jews could stay as long as they agreed to attend classes. Eventually, thousands of travelers passed the doorstep of Heritage House in Jerusalem’s Old City.

Rabbi Schuster’s efforts, however, were not limited to the Old City (though he was famous for his tap on the shoulder at the Kosel accompanied by the question, “Are you Jewish?” or “Do you know what time it is?” which introduced his kiruv efforts, which included urging travelers to have a Shabbos meal with a family in addition to taking classes). He became “a major part of a movement that reinvigorated Judaism worldwide. Unwittingly, he had become one of the legendary forefathers of the teshuvah movement.” Rabbi Schuster was responsible for countless individuals marrying Jewish, living Jewish lives, and having children and grandchildren in Jewish schools and yeshivos.

Anyone who spent time at Heritage House will be transported back to those days when reading the true stories of guests of the infamous Jewish youth hostel. Estrin does a fine job of weaving a captivating tapestry of the lives of many guests with intricate detail, humor, and insight into the ba’al teshuvah phenomenon.

It’s not surprising that Estrin has insight and sensitivity in this arena; she herself is a ba’alas teshuvah from an “ultra-Reform” family, raised with almost no knowledge of Judaism. But after her brother’s visit to Israel and “tap on the shoulder,” D.B. Estrin and her siblings were encouraged to join him and investigate Orthodoxy for themselves. Estrin became religious and eventually took a job as night counselor at Heritage House, where she stayed for five years. Her job consisted of many roles – “tour guide, social worker, and career counselor.” During her tenure she kept a journal; this is the source of most of the stories in the book.

The stories are fascinating, and Estrin does a fine job of recounting intricate details of the travelers’ lives. We meet all sorts of people: spiritual-seekers who have been to the East and beyond, non-Jews eager to learn about Torah and convert, highly assimilated Americans who are wary but intrigued, South Americans, South Africans, and more.

Estrin’s writing is refreshing; although religious herself, now, the voice she writes from is that of the newly religious young woman. She is nonjudgmental of those she encounters and open about her own growth, both personally, religiously, and in terms of her process of dating. Her candor about dating, needing breaks from the intensity of the Old City, and having to deal with difficult personalities brings a flavor of authenticity to the work.

For one who spent a significant amount of time at Heritage House, the book will bring back memories of late-night conversations with staff and other travelers over popcorn, mattresses taking up every inch of floor space in the summers, trips to Neve, and famous teshuvah personalities like Rabbi Asher Wade, Gila Manolson, Jeff Seidel and the Machlis family. One who experienced it will resonate with many of the stories and feel blessed to have been part of a great movement.

And for one who didn’t? The stories will encourage him or her to urge others to go to the hostel, and see for themselves. As we learn in the last part of the book, “The Heritage House Today,” Heritage House is thriving, with many who “are willing to make a space within themselves to learn something about who they are as a Jew.” 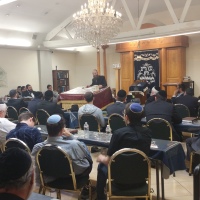 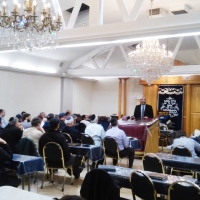