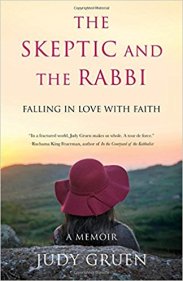 Book Review: The Skeptic and the Rabbi: Falling in Love with Faith by Judy Gruen (She Writes Press, 212 pages)

Judy Gruen’s memoir, The Skeptic and the Rabbi: Falling in Love with Faith, manages to be many extremes: light and heavy, profound and amusing, uplifting and serious. These contradictions are not surprising; they mirror an upbringing of contradictions as well as the main conflict of the author’s life – to become Orthodox or not.

Although Gruen’s struggle seems specific to our time, our religion, and our country, under her scrutiny, it becomes universal. Her spiritual journey speaks to Jews of any affiliation, and to non-Jews, because the profound questions she raises about G-d, family, religious practice, feminism, and secular culture are relevant to any thoughtful reader.

The book starts with Judy’s childhood, including detailed descriptions of both sets of grandparents. On the one side are her mother’s parents, European immigrants holding on desperately to their yiddishkeit while making some modern-day accommodations. On the other hand, her father’s parents are educated Americans; her grandmother, a holistic doctor (unheard of then), and her grandfather, a worldly businessman. Both of her paternal grandparents are antagonistic toward Judaism. Even at this tender age, Gruen feels the struggle; she is attracted to both ways of life, yet they seem incompatible. No doubt Gruen’s background will resonate with many Jewish American readers.

Things get even more exciting when Judy meets Jeff. Although we know (from Chapter One) that they will eventually marry, the author’s ability to build the conflict and create tension keep the reader in suspense. The reader is able to suspend their prior knowledge and remain engaged with the text, a testament to Gruen’s writing skills.

Judy and Jeff’s long courtship, including Judy’s temporary relocation for graduate school, contains many ups and downs. These are compounded by Judy’s questioning of an observant life. While Jeff is already committed to an Orthodox lifestyle, Judy is determined to figure it out for herself.

Although I found myself rooting for them, I also enjoyed reading about the struggles Judy experienced, which she conveys with unabashed honesty. About her first time attending Jeff’s Orthodox synagogue, she writes, “I tried to decide if coming to a separate-seating synagogue demonstrated an admirable, if hard-won open-mindedness, or simply made me a sell-out. I had vowed never to visit a synagogue with separate seating. Now I felt I had somehow crossed the Rubicon.”

Similarly, Gruen writes about modesty (in the chapter on hair covering), “It is a de-emphasis of the physical self in favor of a greater emphasis on the person inside. Practically speaking, it involves dressing, speaking, and behaving in a distinguished, discreet manner.” But we also see Gruen’s struggles to live this ideal, first with covering her hair at all, and then with taking the plunge to wearing wigs which would, “transform [her] unmistakably into an Orthodox woman, someone who is frum, a Yiddish word that means ‘pious’ but has become synonymous with straight-arrow, rightwing Orthodoxy.”

She describes the difficulty she had accepting halachah with such fine detail and nuance that the reader learns a great deal about her personal exploration, as well as yiddishkeit itself. This is side benefit of reading this book; learning about the Torah outlook, not in a didactic way, but in the context of an honest search.

As a local, it’s fun to read about the Gruen’s life and recognize people from our community, including Rabbi Daniel Lapin and members of Pacific Jewish Center (PJC), Michael and Diane Medved, and many others. Gruen’s characterizations are solid, but I found those of her two grandmothers exceptional. While it would have been easy to stereotype both her balabusta grandmother and her feminist one, her use of specific details and dialogue create multi-dimensional people.

“Growing up, I constantly wondered: Could I possibly carve out a life that would blend the best of my grandparents’ distinct and singular worlds?” Yes, as an accomplished wife, mother, writer, Jewish woman, and community member, Judy Gruen was able to merge the best of both worlds. I am grateful she chose to share her picture of wholeness with us.

Barnes & Noble has selected The Skeptic and the Rabbi for a special in-store promotion. The books will be prominently displayed in “end cap” displays from Sept 19 – Oct. 2. Mazel Tov!

Join Judy Gruen as she speaks and reads from her book at her launch event this Sunday evening, September 10, 8 p.m., at The Community Shul, followed by a Q &A and refreshments. The Community Shul is located at 9100 West Pico Blvd. 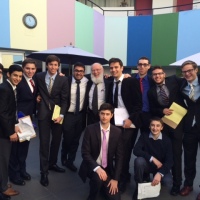