Over the past week, the Los Angeles Jewish community was privileged to host the Sephardic Chief Rabbi of Israel, the Rishon Letzion, Harav Yitzchak Yosef, shlita. The Rishon Letzion arrived in Los Angeles on Tuesday morning, November 21st, and was welcomed with much honor by many representatives of the local Jewish community. After shacharit and a brief shiur at the Shuvah Israel Torah Center, the Rav visited Tashbar Sephardic Yeshiva Ketana. 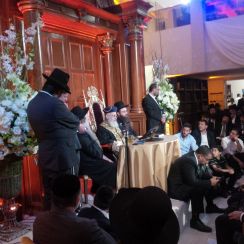 Packard Street was closed to traffic as the Tashbar staff rolled out the red carpet in the middle of the street to greet the Chief Rabbi. Accompanied by traditional Sephardic melodies, the rabbi was led to a podium, where he was introduced by Rabbi David Zargari, Dean and Founder of Tashbar. Then the Chief Rabbi spoke to the students, reminding them how fortunate they are to continue the tradition of their ancestors. The speech was translated into English by Rabbi Moshe Abady, menahel of Tashbar. After the speech, each of the Tashbar boys had the opportunity to kiss the rabbi’s hand and receive his blessing.

Tuesday night, Chacham Yitzchak spoke at the Eretz Cultural Center in Tarzana. The event was organized by all the Sephardic congregations of the Valley. Congressman Brad Sherman greeted the Chief Rabbi and presented him with an American flag that was flown over the Capitol in Washington, D.C. Then the rabbi spoke to hundreds of attendees, showering them with blessings.

“Why did Hakadosh Baruch Hu create a round world?” the rabbi asked at the Eretz Cultural Center, as well as in several other locations. He explained that the world exists in the merit of Torah learning. While there are many Jews learning Torah in Israel, even late into the night, eventually they all need to sleep. “When in Israel they go to sleep, in other places people wake up, pray, and learn Torah,” he said, urging the listeners to continue learning and strengthening Torah.

Rabbi Yosef quoted the gemara that says that Torah is the antidote for the yetzer hara. He lamented the rate of assimilation in Jewish communities and praised the rabbis who are hard at work teaching Torah and maintaining Judaism. He blessed the local rabbis with success in their work, and everyone present with success in all their undertakings and with children who “walk in the ways of the Torah.”

In the following four days, the Chief Rabbi spoke in several local schools and yeshivot: Hillel Hebrew Academy, Gindi Maimonides Hebrew Academy, Yeshiva Aharon Yaakov-Ohr Eliyahu (YAYOE), Yeshiva Ohr Chanoch, Yeshiva Ohr Elchonon/Chabad, Yeshiva Gedolah, and Toras Emes. In each school, the rabbi emphasized the importance of learning Torah. “Torah is our whole existence,” he said at many of the schools. “Not every boy and girl gets to go to a school like this to learn Torah. Rejoice that you merit to learn Torah!” At Yeshivat Ohr Chanoch, he said that Torah makes a person happy both in this world, as well as the next. He told stories about his father, Harav Ovadia Yosef, ztz”l, whose Torah learning was legendary and whose works are now studied in all Sephardic yeshivot and beyond. He described how his father would sing happily after an especially enjoyable learning session.

The rabbi also addressed the girls, encouraging them to learn practical halachah and to marry men who learn Torah. At Bais Yaakov, he told stories about his mother and emphasized the woman’s role in building a Torah home.

At each school, Rabbi Yosef blessed the students, as well as the teachers, wishing them success in their holy work.

The Chief Rabbi’s visit made an impact on the students, and their teachers. “It was wonderful to hear such a major talmid chacham,” says Rabbi Eliezer Gross, Rosh Yeshiva of Yeshiva Gedolah, where the rabbi delivered a shiur on Masechet Yevamot and shared words of mussar, encouraging each and every student to become a ben Torah. The rabbi’s words were a big chizzuk for the students, explains Rabbi Gross.

Rabbi Aharon Wilk, Head of School at Gindi Maimonides Academy, says the Chief Rabbi’s visit was a “memorable experience” for the students, who observed “tremendous kavod hatorah” and got the message that Torah giants “are the people we need to look up to.”

On Wednesday, Rabbi Yosef held a Community Rabbinical Conference at Nessah Synagogue. The event was attended by all local Sephardic community rabbis, as well as some Ashkenazic rabbis. The Chief Rabbi gave chizzuk to the rabbanim, encouraging them to take time out of their busy schedules to pursue their own spiritual growth and learn Torah for themselves.

The Chief Rabbi also met with the local Chabad shluchim and discussed conversions.

On Friday morning, Rabbi Yosef was the sandak at the brit milah of Chananel Kohanchi, the son of Sahala and Babak Kohanchi.

The Chief Rabbi also met with the former mayor of Los Angeles, Antonio Villaraigosa, who is currently running for Governor of California. The Rabbi and Mr. Villaraigosa spoke about Israel, and the Rishon Letzion gave him a brachah for success in his campaign.

The Chief Rabbi spent Shabbat at Kehilat Mogen David, where he prayed with the congregation, participated in communal meals, and delivered divrei Torah and shiurim. The shul was full to the brim, as over six hundred people gathered to pray together with the Chief Rabbi, some of them walking for miles to get there.

“The visit made a profound impact on the entire Sephardic community,” adds Rabbi Abady. “We will only recognize the full impact in the future.” Inspired by the visit, Rabbi Abady is currently organizing new shiurim by local rabbis in Sephardic halachah. “If we channel the energy from this visit into practical and tangible kabbalot, then we have the power to extend the impact of the visit for a very long time,” Rabbi Abady wrote in a local WhatsApp group. “Dedicating ourselves to learn more, to learn more halachah, to give and/or attend more shiurei Torah, and to be even prouder of our mesorah and our minhagim are some of my personal takeaways from this visit.”