We recently instituted a strict “no spoilers” policy in our home. Since our family doesn’t watch TV or movies – with very, very few exceptions, mostly involving illness or educational material – the focus of our policy is books. No one is allowed to spill the beans regarding the plot details of any book to anyone else in our home (or in our car) on pain of Mommy shrieking at them like a banshee: “No spoilers! No spoilers!”

(A frightening punishment, I know.)

Starting with Harry Potter, and then moving on to Septimus Heap, Alcatraz vs. the Evil Librarians, and The Land of Stories, my children have been tearing through fantasy series one after another. My kids usually read them in order, from eldest to youngest, and pass each volume down as they finish them.

The trouble is, my eldest developed an infamous habit of spoiling each book for his younger siblings. Deaths, plot twists, and surprise endings were revealed far ahead of time, detracting from the littler ones’ pleasure. Tears were shed; occasionally, fisticuffs were exchanged.

At first, my husband didn’t see spoiling as a problem. As a reluctant reader of fiction, he has always been a bit of what author Brandon Sanderson calls “a last pager.” If he can figure out what happened in a novel by skipping to the final chapter, he considers it an efficient use of time, not a disappointment. Besides, my husband argues, the best books aren’t spoiled by spoilers. Don’t we read the Torah (with relish!) year after year even though we already know that Yitzchak is going to survive the akeidah, Yosef’s brothers will find him in Egypt, and the Jewish people will make it through the Red Sea intact?

My own hesitation to intervene has more to do with personal guilt. Since I don’t go to the movies, I have no problem with listening to spoilers on the radio or reading about them in reviews. In fact, I relish such moments, which allow me to vicariously enjoy films without any of the guilt I’d feel if I stepped into an actual movie theater.

Unfortunately, in my enthusiasm, I sometimes forget who I’m talking to. When Rogue One came out, I wrongly assumed my brother had heard about the ending already, and I accidentally spoiled it for him. Oops.

I’m no better with books. I failed to realize that my 12-year-old was listening in while I was discussing the ending of Murder on the Orient Express with my 15-year-old until it was too late. And when my 10-year-old told me that her class had reached the story of Devorah and Barak in Navi, I accidentally revealed what happened when Barak insists that Devorah travels with the troops. I thought she already knew!

What finally drove me to the “no spoilers” policy was my youngest daughter’s discovery of The Keepers of the Lost Cities. For once, she was the aggressor, talking non-stop about each book as she devoured it.

While it’s kinda cute when a tiny tot punches her big brother because he told her all about Dumbledore’s death (see, there I go again!), it’s less cute then he punches her back.

Besides, I haven’t yet read The Keeper of the Lost Cities. I don’t want her to spoil it for me. 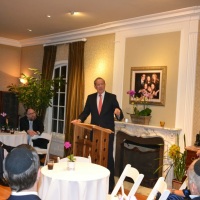