The spirit of celebration and ahavas Yisrael filled the Saban Theatre this past Thursday, as over 2000 children and their teachers and chaperones gathered for the annual Chabad Youth Program Lag B’Omer Unity Concert. The attendees came from twenty-four schools and organizations, including both Chabad and Modern Orthodox schools throughout the Greater Los Angeles area, as well as the Friendship Circle and Etta Israel, organizations that work with individuals with special needs.

This year’s event was produced by Yossi Burston and coordinated by Rabbi Tzemach Cunin of Chabad of Century City and Chabad Youth Programs. Rabbi Mendel Duchman of Kol Yaakov Yehuda Jr. Congregation was sorely missed this year, as he was out of town due to a family simchahh.

“The Lubavitcher Rebbe highlights the day of Rabbi Shimon Bar Yochai, Lag B’Omer as an important day of Jewish unity,” says Rabbi Tzemach Cunin. “For over 40 years here in Southern California, it has become a tradition to gather children together and make community events. This year, we put in the effort to get as many schools as possible to come together as one. I have spent the past year working with the principals of the different schools to make it as united as possible. I hope the Rebbe is proud!”

The concert opened with a performance by 8th Day, a Southern California Jewish band beloved to local children and adults. The performers were greeted by cheers and applause as they sang, “Celebrate in City Streets.” 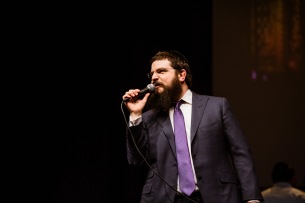 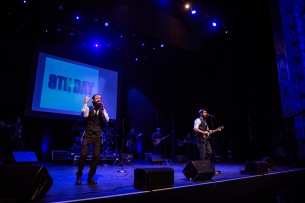 Then the Master of Ceremonies, Rabbi Mayer Greene, Youth Director of Chabad of Tarzana, welcomed all the schools and organizations in attendance. “Lag B’Omer is a day of unity,” he said, emphasizing Rabbi Akiva’s message of ahavas Yisrael.

Rabbi Boruch Shlomo Cunin, Executive Director of Chabad of California, also addressed the audience. “Lag B’Omer, the day of the Rashbi, is a day of great simchah,” he said. We can be happy, he explained, “when we do mitzvos with other Yidden.”

Tzedakah was collected at the concert in the merit of refuah sheleima for everyone in need, and in particular for Odel Miriam bas Bluma Leah (Rebbetzin Cunin), Yosef Yitzchak ben Bracha (Rabbi Yitzi Hurwitz), and Sara Masha bas Esther Leah (a local Chabad shlucha in need of prayers).

Benny Friedman, another popular singer, continued the concert, delighting the audience with his songs. “Today, Lag B’Omer, is a special day to get even stronger at the mitzvah of ahavas Yisrael,” he said in between songs.

The response to the call for unity was met with much enthusiasm. Children got up from their seats and danced to the music, waving colorful glow sticks. Groups of children formed human trains and danced past the stage, trying to high-five Benny Friedman, and cheering when they succeeded. As Benny performed, the whole theatre came alive in waves of glowsticks, with both children and adults clapping and singing along. All the attendees, young and old, were united in celebration of the mitzvah of ahavas Yisrael.

After Benny Friedman’s energetic and inspiring performance, Rabbi Mendel Cunin of Chabad of Larchmont led the audience in the recitation of Tehillim. Then Rabbi Aron Teleshevsky, director of Chabad Youth, called on representatives of different schools and organizations to recite the 12 pesukim. One of the pesukim was recited by a representative of the Friendship Circle, a young woman with Down Syndrome.

Then a juggler, Fantastic Patrick, entertained the audience with his juggling and riding a unicycle.

Afterwards, 8th Day came back on stage with more songs that elicited an energetic response from the audience. Introducing the song I got a Little Bit of Moses in Me, Bentzy Marcus of 8th Day said, “Rashbi was the Moshe Rabbeinu of his generation. We each got a little bit of Moshe in us. It is so empowering when we realize it.”

After their performance, Rabbi Greene led a game of musical chairs, calling on rabbis from each school and the singers to participate. Rabbi Levi Solomon of Emek Hebrew Academy won the game, receiving 10 free tickets for next year’s Lag B’Omer concert for his school.

The concert concluded in the spirit of true unity, with Benny Friedman and 8th Day performing together, with the enthusiastic participation of the audience.