On Sunday, 28 Iyar, talmidim of Cheder Menachem Los Angeles, together with their parents, grandparents, relatives, and friends, gathered together to mark the culmination of over two months of learning mishnayos and Tanya baal peh, as a present to the Rebbe in honor of Yud-Alef Nissan.

The event began with a video of the talmidim of Kitah Alef, learning Tanya baal peh in class, which was followed by these talmidim, in their first year as part of mishnayos baal peh, receiving their prizes. Rabbi Mendel Greenbaum, Menahel of the Cheder, then began the formal part of the event, welcoming all. Rabbi Greenbaum introduced Rabbi Shimon HaLevi Raichik, Rav of Anash, who shared divrei brachah, reminding all present that it is in the zechus of the children learning Torah that we received the Torah on Shavuos.

Special hakaras hatov was expressed to Reb Yankel Ginsburg and family, who are the “Zevulun” of the Mishnayos Baal Peh program, sponsoring the prizes given to the talmidim, liluy nishmas his father Reb Dov Reuven ben Reb Dovid HaLevi, obm.

Rabbi Sholom Heidingsfeld, the coordinator of the Program gave a brief overview of this year’s accomplishments, highlighting the fact that this year, in particular, we saw a lot of ish es re’eihu yazoru, with classmates encouraging each other and helping them memorize and be tested. With over 64,000 lines of Torah learnt baal peh, including more than 25,000 lines of mishnayos, 11,500 lines of Tanya and many lines of siddur and yediyos klaliyos, every talmid participating has a share in the nachas we have brought to the Rebbe. 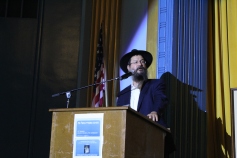 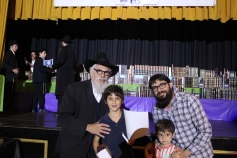 Highlighting this, a video was shown with part of a sichah where the Rebbe spoke about learning and reviewing mishnah by heart, followed by two occasions where talmidim of oholei Torah went for Dollars, telling the Rebbe about the mishnayos they had learnt. We see the Rebbe’s brochos continuing, where one of the boys in that video, has now three children of his own in the Cheder, who each learnt substantial amounts of mishnayos and Tanya baal peh this year.

Three talmidim, Yitzchok Wolowik, Avremele Levitansky, and Levi Yitzchok Hecht came up to the stage as representatives of the Yud-Bais Perakim Club, encouraging talmidim to learn the first 12 perakim of Tanya by heart before their bar mitzvah. These boys have all learnt more than seven perakim by heart already.

A lot of mishnayos learnt this year were learnt as part of the Siach Hasodeh program, started in memory of Hechover Reb Shmuel Yosef and Mrs Chana Heidingsfeld, obm, where talmidim can learn and be tested from the beginning of the year, baal peh, on the mishnayos they are learning in class.

After this, every talmid received their prize according to their achievements. Each talmid also received a special booklet made for the occasion which includes stories as well as short sayings from the rabbeim about the importance of learning and reviewing mishnayos and Tanya baal peh