Bucking the Global Trend: The Story of Israel’s Demographic Miracle

The State of Israel’s 70th anniversary celebration earlier this year was full of commentators rightly praising the country for its incredible contributions to humanity and resilience in the face of enormous challenges. However, what was missing in the discussion was what is arguably one of Israel’s greatest and most underappreciated achievements: maintaining a growing birth rate when the rest of the developed world is experiencing an unprecedented decline.

Just 20 years ago, Israel was on a demographic downturn like the rest of the first world. In fact, all Jewish populations throughout the world were trending toward negative population growth. The recent boom of immigrants from ex-Soviet countries had ground to a halt, and there was no great desire on the part of Western Jews to make aliyah in significant numbers. At the same time, the Arab population was growing dramatically.

In light of these trends, concerns were raised that the very identity of Israel as a Jewish state was at risk. With the security situation worsening dramatically after the start of the Second Intifada in September 2000, these warnings grew even stronger as many in the Israeli political arena and abroad sought a lasting solution to the Israeli-Palestinian conflict to prevent a mass emigration of Jews.

Miraculously, no mass emigration happened during all the years of the Second Intifada. Israel beat back the forces of terrorism, and the economy began to boom. Crucially, despite the negative birth rate trend affecting the world, Israel’s birth rate started to go up. Today, it is much higher than that of the West Bank and even most Muslim countries.

The question is: What factors can we point to that can explain this incredible reversal?

For one thing, when we look back at the earliest days of the Zionist story, we see a long string of failed predictions about a dangerously low birth rate. The Russian-Jewish historian and anti-Zionist Simon Dubnov infamously stated in 1898 that “the creation of a state with a significant Jewish population is impossible… In the year 2000, there will live in Palestine at most 500,000 Jews.” In reality, when the State of Israel was founded in 1948 there were already 600,000 Jews living within Israel.

When the First Intifada started in the 1980s, it became fashionable amongst researchers and political figures to warn of an impending demographic collapse. Supposed experts such as Arnon Sofer of Haifa University and Meron Benvenisti, former deputy mayor of Jerusalem, framed the population question in strictly political terms. They warned that unless Israel agreed to a radical peace proposal with Palestinians, it would face a serious threat to its Jewish majority. However, this view was certainly not shared by all those in power.

The right-wing prime minister at the time, Yitzchak Shamir, stated, “From our inception our nation was ‘the smallest among the nations,’ and always faced demographic problems. Yet never did our people resort to the solution of escapism. That is no solution.” As it turns out, Shamir was correct. Despite the ongoing threat of terrorism, Israel saw a massive influx of Jews from ex-Soviet countries in the early 1990s.

In a 1996 speech, Yasir Arafat stated to an audience of Arab diplomats that “We will make life unbearable for Jews by psychological warfare and population explosion. Jews will not want to live among Arabs.”

During the midst of the Second Intifada in the early 2000s, it seemed to many that this tactic was working and that the Jewish majority in Israel was in a state of catastrophic decline. Arnon Sofer, repeating his pessimistic outlook first expressed during the First Intifada, claimed that Israel was “in a demographic collapse; the demographic map in Jerusalem, in the Negev, and in the Galilee points to devastation.” Even the staunch right-winger Benjamin Netanyahu, then Minister of the Treasury, warned that “If we have an Arab minority of 40 percent, the Jewish state is nullified.” Even after the Second Intifada, American leaders such as Bill Clinton, Barack Obama, and John Kerry have warned that the only way to prevent a demographic crisis is for Israel to make heavy concessions to the Palestinians.

Despite all the political rhetoric and dire warnings, the reality is that Israel is in an excellent demographic situation, especially compared to other Middle Eastern countries. To take an example, Iran’s population has been aging at an alarming rate. Combined with a poor economy that is ill-equipped to deal with an elderly population and ethno-political unrest, Iran and several other Middle Eastern countries have entered a so-called “death spiral.”

As for the West Bank and Gaza, since the 1993 Oslo Accords, Israel no longer controls the data on birth rates. Instead, the information is supplied by the Palestinian Authority and has been found to be highly unreliable. Likely, the PA inflates the numbers for psychological and financial gain. Several Israeli demographers have found the official PA Arab population numbers to be inflated by as much as one million. Similarly, there have been large disparities between the official fertility figures for Arab women and those supplied by reliable sources such as the CIA Factbook.

According to the most sources, both Palestinian and Israeli Arab birth rates have been on the decline for a while now while Jewish Israeli birth rates have been growing at a record pace. In the face of this massive shift, scholars such as Arnon Sofer changed tactics and started claiming that the demographic threat to Israel was now an anti-Zionist Chareidi majority. This claim proved to be spurious as well.

Besides a small and vocal minority, most Israeli Chareidim are highly supportive of the State of Israel. Furthermore, the claim that Chareidim are responsible for most of the increase in the birth rate is also incorrect. Chareidi birth rates have declined by approximately 10% since 2000 while the rates for “traditional” and secular women have soared.

Surprisingly, the demographic group that has contributed the most to the increased birth rate in Israel is educated, middle-class Jews – quite the opposite from many other countries. Israeli society has managed to balance rising levels of affluence and education with a vibrant family culture. This unique situation can be attributed to a strong sense of national solidarity and a shared history. Indeed, one would expect such a sentiment to arise from decades of wars, terrorism and international ostracization; however, the actual roots go much deeper. Many Israeli Jews, even secular ones, learn from the Torah that family is crucial to Jewish life, and the observance of holidays in Israel such as Yom Kippur and Rosh Hashanah revolves around the family. Thus, for many Israeli Jews it is both a right and a duty to start and grow their family even into their late age.

Thus, with Israeli society’s ironclad commitment to the family, it is no surprise that Israel is by far the world leader in fertility treatments. Over 40,000 publicly funded treatments are performed every year. An Israeli woman can undergo such treatments as many times as she wishes until age 45. Israel is also a leader in healthcare for pregnant women and has developed revolutionary technologies for surgery on fetuses with life-threatening conditions.

To sum up, in 2010 there was a Jewish to Arab birth rate of 2:1, while it is predicted that the ratio will be a staggering 4:1 in 2020. Furthermore, with Anti-Semitism on the rise in Europe and elsewhere, it is expected that the Israeli Jewish population will grow even more with an average of about 200,000 additional Jews every decade.

For the first time since the Second Temple era, Israel is home to the world’s single largest Jewish community. Additionally, with most diaspora communities experiencing a negative birth rate, Israel is also close to becoming (or perhaps has already become) home to the majority of Jews in the world, which has not been seen since possibly the First Temple era. It is also estimated that Israel will become home to about two-thirds of all Jewish children in the world.

To be certain, there are challenges presented by such unprecedented growth. As diaspora communities continue to decline and more Jews intermarry, connecting with unaffiliated Jews will be a thorny task for Jewish policy makers.

On the other hand, Israel has become the center of Jewish life for many in the diaspora and has awakened a sense of Jewish belonging for many who were previously unaffiliated. Some of those are descendants of those who converted during the Inquisition and the Holocaust. They now feel a sense of safety and belonging in Israel. 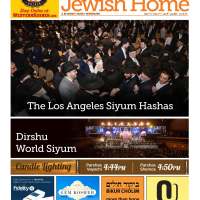