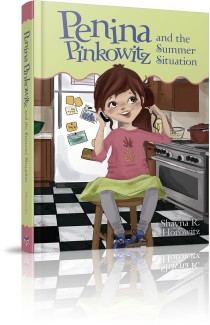 Penina Pinkowitz and the Summer Situation introduces fun-loving Penina Pinkowitz, whose summertime antics are sure to keep your daughter, and yourself, turning the pages of Shayna R. Horowitz’s new book. She has created a superior read that leaves out language and references typically found in secular middle readers. Instead, she focuses on a wonderful story and great character.

Almost fourth-grader Penina Pinkowitz is creative, adventurous, and determined to pass the deep-water test by the end of the summer so she can earn her coveted certification card. The reader watches how Penina navigates the obstacles that get in her way (and they are many), including the snobby Riki and her partner, Fraidy. Riki makes Penina’s camp life miserable, while Penina has the mazel to meet Nechami, and the two quickly become best buds.

Meanwhile, Penina’s father is an inventor, and their home holds many wacky inventions, such as bedroom-window windshield wipers, an “achy, shaky, quaky, wakey clock,” and an electric laundry sorter. All of that action adds a burst of excitement to the book and contributes to the reader’s ability to “see” the story.

Although Penina’s adventures and misadventures are fun to read, Horowitz does a great job of implanting lessons which are easily absorbable by readers as they are shown in the story, rather than told in a more overt fashion. The reader cringes when reading about Riki tripping Penina or teasing her. Although Penina’s pain is felt by the reader, she doesn’t become a victim. Rather, she is able to move past the event and stay true to her “out of the box” personality. This teaches the reader that she, too, can be herself, not “take it” from a bully, and have great friendships with nicer girls.

My daughter had a great time using this book for a book report in fourth grade and was able to incorporate Penina’s personality into her presentation—she really “got” her! One note, however: I did notice that in a few instances, some of the words Horowitz uses are not quite third/fourth grade level.

Although summer is coming to a close, reading this book at any time will keep your daughter excited about the scent of chlorine, major trip breakouts, and, more importantly, how to handle the ups and downs of life with a smile.

Chaim Walder is back with the tenth book in his acclaimed Kids Speak series. In the preface, Walder shares a wonderful anecdote about how he began. While teaching fourth-grade boys, he had a student who hit other kids. Nothing worked to get him to stop, so Walder encouraged the boy to write down his feelings. The five lines written by this troubled boy became the first “Kids Speak” story, which Walder read to the other boys. Those fellow students absorbed the message that the boy was simply trying to be their friend, and the behaviors improved.

That was 25 years ago. Since then, the series has been translated into eight languages. The idea to tell, to talk about feelings has, thankfully, become de rigeur. In these fourteen new stories, kids talk about their actions, thoughts and feelings. Some of these aren’t always so admirable, yet those stories are perhaps the most important for our kids to hear, real stories about real kids who behave as all people do—imperfectly—but who grow and learn from their actions.

These stories touch on such important middos as judging favorably, bullying, not embarrassing or humiliating someone, honoring one’s parents, the proper use of money (not being extravagant), patience, discovering a friend cheated, and fear. As usual, Walder keeps the reader in suspense, and I found myself riveted by many of the stories. One, entitled “Wearing the Mask,” is about Gadi, a popular boy, and the not-so-popular Shauli, switching places. This generates astonishing consequences and a powerful lesson. It was hard to believe this story was true!

Another wonderful story is about Rachelli, a self-proclaimed snob, who is planning a lavish bas mitzvah, complete with a party-planner, fancy décor, a theme, orchestra—a “there’s-never-been-and-never-will-be-another-one-like-it event.” This is the way all of her friends celebrate their bas mitzvahs. Rachelli’s plans change when she meets Lele, a girl her age who’s in the hospital. The girls become friends, and Rachelli’s demands for her bas mitzvah shift in an important way.

What astonishes me each time I read these stories is Walder’s uncanny ability to get into the heads of these kids, to find their voices and tell their stories from their points of view. Walder so completely becomes the “I” as he writes, it’s easy to completely forget that a grown man has recorded them.

One or two stories might be a bit scary for a younger reader, perhaps below age nine or ten. But since a parent or older sibling would likely be reading these stories to him or her, that would be enough to make sure the child isn’t unduly afraid. 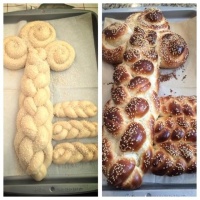 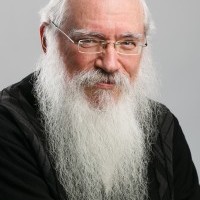