Chabad of the Valley Lights Up Universal Studios CityWALK

Chabad of the Valley’s highly acclaimed “Chanukah at CityWALK” has become known as the preeminent Chanukah event on the West Coast and this year was no different as families came out in record numbers and flocked to the plaza at Universal Studios CityWALK.

A night of Jewish entertainment was featured on the prominent CityWALK stage, a venue which plays host to some of the biggest names in the secular music world. This year opened with singer Ari Hershoff, who is quickly proving himself to have a big future ahead of him. He was followed by Isaac Gordon, a young and upcoming talent with a significant fan club in the audience.

Internationally renowned singers Benny Elbaz and Benny Friedman both headlined the night along with the debut of the sensational Act One Orchestra. Both Elbaz and Friedman put on dynamic performances with one hit after another.

Rabbi Yossi Baitelman, whose foresight and vision conceived bringing such an event into the heart of the Universal Studios thanked the event’s Executive Producers Jonathan Herzog and Rabbi Mayer Greene for persevering in the face of great challenges to make Chanukah@CityWALK come to fruition this year. He also acknowledged the entire Chabad of the Valley team for their diligent efforts, including behind the scenes technical director, Rabbi Yochanan Baitelman; media liason, Rabbi Yanky Kahn; logistics, Yochonon Gordon; and Valley CTeen Director, Rabbi Shua Einbinder. 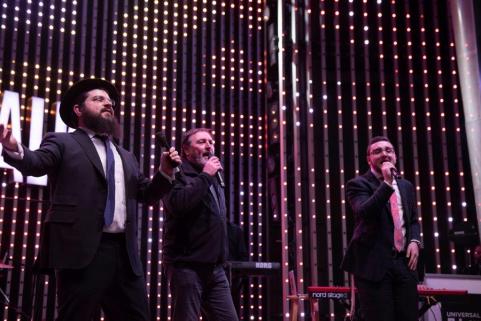 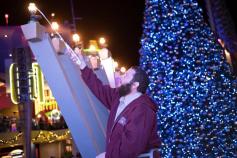 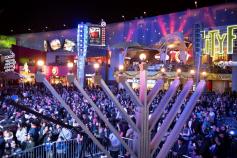 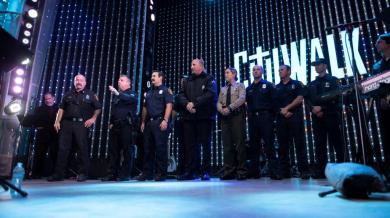 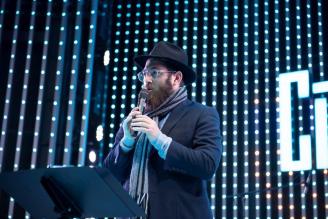 Benny Friedman performed “Reb Yehoshua Omer,” a tribute song he created in honor of his uncle, Rabbi Joshua B. Gordon, ob”m. Chabad of the Valley’s Associate Director, Rabbi Mordechai Einbinder, then addressed the crowd, extolling the virtues of Rabbi Gordon, who was his mentor and colleague, calling him the architect of the vibrant Jewish footprint that now envelopes the Valley and such programs as Chanukah at CityWALK. Rabbi Gordon was the first shliach sent by the Rebbe to establish Chabad of the Valley, which now houses some 27 Chabad centers under its umbrella. He concluded by marveling and reflecting at the greatness of the menorah lighting at the Brandenburg Gate in Germany just a few days earlier, highlighting how a place where the darkest form of evil had taken place but was now was eclipsed by the pristine purity of the menorah signaling Jewish eternity.

The Chabad Shliach to West Hills, Rabbi Avi Rabin took the stage to recount the recent experience of the Woolsey fires that impacted many shluchim across the Valley area and to publicly thank the Los Angeles Fire Department and members of law enforcement who were on hand for their tremendous efforts in keeping everyone safe. A powerful and moving tribute was also made in honor of the victims of the Pittsburgh massacre.

Culminating the evening, longtime supporters of Chabad, were invited to kindle the 15-foot menorah situated in the middle of the CityWALK plaza, as Chabad of Encino’s Rabbi Ari Herzog recited the blessings, accompanied by his son, Shney. The night finished with a grand finale including a Hollywood-style sound and light spectacular. 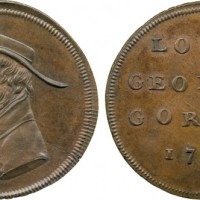 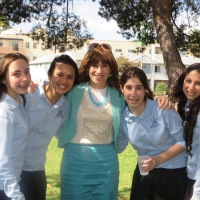