From Head to Heart

“The longest journey you will ever take is the 18 inches from your head to your heart.”

While jogging with my son one morning I asked him if he thought I should accept a lecture opportunity I’d been offered. My dilemma? Time. My children (nursing baby included) and prior commitments required so much from me that I didn’t know if I could take on even one more task.

I was surprised by the maturity of his response. “Mom, you are always doing for everyone else. You haven’t accepted a speech in ages. Do something for yourself now. I’ll help you. Tell me your shiur.”

Even though we usually try to tell each other at least one “deep idea” or Torah story during our jogs, I was taken aback and touched by his willingness to help and discuss Torah for longer.

And so, we began.

We are currently counting the Omer and I’d like to propose a question. What was the purpose of the Jewish nation’s exodus from Egypt? Was it simply to escape slavery? The true reason for leaving Egypt was to receive the Torah (The Book of Our Heritage, p. 680). If the whole purpose of the Pesach experience is to reach Shavuot and receive the Torah, then the procession of the holidays is strange. Shouldn’t Pesach be immediately followed by Shavuot? Instead, between Pesach and Shavuot, we “count the Omer.” “Omer” refers to the korban omer, a particular sacrifice brought onto the mizbe’ach on the second day of Pesach. If the sacrifice was brought on one day, why does “counting the Omer” take 49 days?

Famous commentaries tell us that Egypt and the exodus are compared to the three stages of life:

In Egypt, we were slaves to Paroh. He worked us day and night with backbreaking labor. We were whipped for the slightest error. We were sleep deprived, working early in the morning until late at night. And this slavery lasted so many years that we never thought it would come to an end…

Some readers might ask, Isn’t pregnancy a wonderful time of life where everything is perfect? I’m sure it is for some people, but from first-hand experience I can tell you that pregnant women experience backbreaking labor, often feel like a punching bag, and are sleep deprived. And just like the Jews never thought their condition would end, I am telling you there was a time during the ninth month where I literally did not think the baby would ever arrive!

Not everyone has such a difficult pregnancy, but you can begin to see why the commentaries make that analogy.

At the end of pregnancy comes birth. So too, Hashem split the sea suddenly and led the Jews from a place of water into a dry land. We then spent years in the desert. The desert was this magical place where every need, whim, and desire of the Jewish people was fulfilled. Every morning the Jews in the desert would wake up bright and early, opening our front door to discover a fabulous breakfast buffet called mann right on our doorstep. Mann was white (similar to the milk fed to a baby) and found under the morning dew. It would taste like anything our heart desired. And unlike food which, after our body processes the nutrients, ends up eventually as waste, the mann had no excess. The Jews didn’t produce ANY bodily waste the entire time they were in the desert!

We didn’t have to worry about making a living, buying or cooking food, paying rent, or buying or laundering clothing… Hashem took care of this all. We had NO responsibilities…just like children.

Eventually, though, every child must grow up and become an adult. At Mt. Sinai we received and accepted Torah. It was a huge honor but also a huge responsibility.

After receiving everything from G-d, now the Jewish people had to keep mitzvot. A huge responsibility rested on our shoulders. Human beings can’t go from being a newborn to adulthood in one second.

As we matured, we began to realize that Hashem did all that feeding and cleaning and housing for use in the desert for us! We said, “You did all this for me? Now what can I do for You?”

The Omer period helps us develop those feelings of appreciation and responsibility.

Where is the first place in the Torah that the word “Omer” is mentioned? It’s when God first introduces the mann.

This is the thing that the Lord has commanded, Gather of it each one according to his eating capacity, an omer for each person, according to the number of persons, each one for those in his tent you shall take. (Shemot 16:16)

He gave us an omer worth of manna, a specific measure of it.

As children we received the mann in the desert. Then, we as adults gave back an amount of barley of the same measure as a sacrifice on the mizbe’ach each year on the second day of Pesach.

Pesach is a time in which it’s relatively easy to see that G-d runs the world due to the plagues and the miracles at the Sea. Sure, we planted the grain, tended it, and harvested it, but we know the barley in the Omer offering really belongs to G-d. At least, we know it intellectually. However, the heart may take a bit longer to catch up–49 times longer. And at the end of that process, we’ll have a “lev tov,” a “good heart.”

Incidentally, “lev tov” has the gematria of 49.

I try to keep this in mind when raising my children because the time it takes for them to link their actions with life’s natural consequences seem to take forever.

But then, when you see moments of supreme maturity in your child like my sons on our jog, your heart swells and you realize how the message of life has reached their heart.

Of course it is not just children who take time turning inspiration to dedication. Our inner child struggles as well.  We often know and desire to do the right thing, but developing the ability to concretize that desire takes time and patience.

As we count the Omer this year, let’s use it to turn our hearts in the directions that our minds know we should go–towards G-d and His Torah. 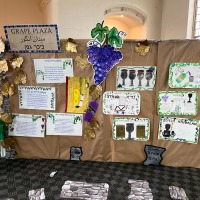